It’s been over 2 years since my last post and so much has happened as Sheba watches over us!

We never did figure out what was causing Buster’s gastrointestinal upset.  At the same time it was discovered he has several degenerative issues in the spine, so our TCM Vet had us switch him to a turkey-based raw diet and he’s had few to little GI problems since.  Trust me, we’re cool with no poopies!  PT, accupuncture and Adequan injections are doing the trick for Buster, and he is now the proud owner of Sheba’s Webmaster Harness.

In March 2017, Princess Scout joined the pack.  She’ll be turning two next week and is the complete opposite of Sheba in looks and temperament, just what we needed!  She also helped bring the boys out of their depression.

Today, our beagle mix Nikko is at the vet having a mass removed.  Just talked to the doc and she said it looks fatty, but was really entwined in the muscle and tendon at either end so we’re waiting on pathology.  Keep your fingers crossed for us!  We can totally handle another Tripawd, but with preexisting spinal issues it’ll put a lot of stress on his body.

quick update on Buster. Not much of one because there’s been no change in the elimination problems. We’re finishing up round 2 of metronidazole and his poop is slightly more form than “cow pie”. Also still having incontinence issues and leaving pee pee puddles intermittently. Dr Moore wants to scope the urethra and get a bigger sample of the prostate (last one was too small) but we have to get the poop under control first. Clay has helped a bit, but still no normal poop.

He and Nikko are both still DEPRESSED. 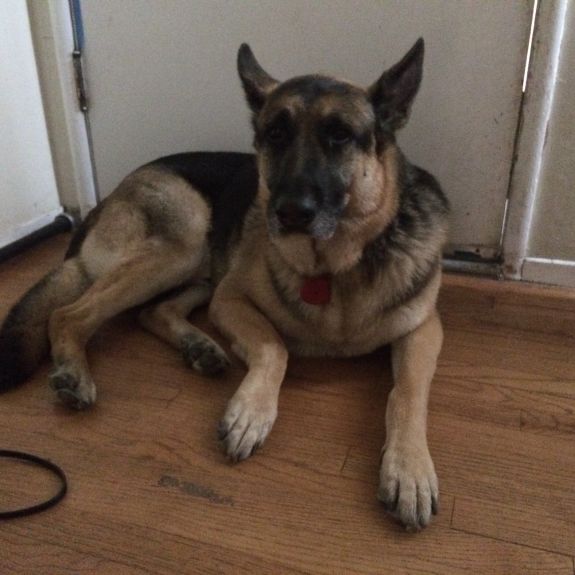 It’s been a week and a half since Sheba died.  Us humans are still sad, but it’s taken quite the toll on Bruddah Buster.  He’s been visibly depressed in addition to having physical symptoms like diarrhea and urinary incontinence.  So we took him in to our family vet, who ran some tests then sent us to the internist that last treated Sheba.  Since Buster ate Sheba’s poop on a few occasions we’re going to have to watch him for symptoms, but its highly unlikely he’ll get a fungal infection from her poop.  Then again, it was also unlikely that Sheba would get a fungal infection in the first place!  We did learn that he’s got enlarged spleen and prostate, so they took biopsies yesterday.  He came home drunk and its just now wearing off.  They also gave him metronidazole for the diarrhea (he had an accident in the hall between exam rooms and the kennels!), and are testing for the usual suspects.  We have an empty pool (thank you, California Drought) with a bit of water in it.  Vector control comes out and drops these tabs in it, but I think they’re for killing mosquitoes, not things like giardia.  Nikko and Dolly are back to normal at least.  Hopefully this all clears up soon, we’re going through a lot of cleaning supplies! 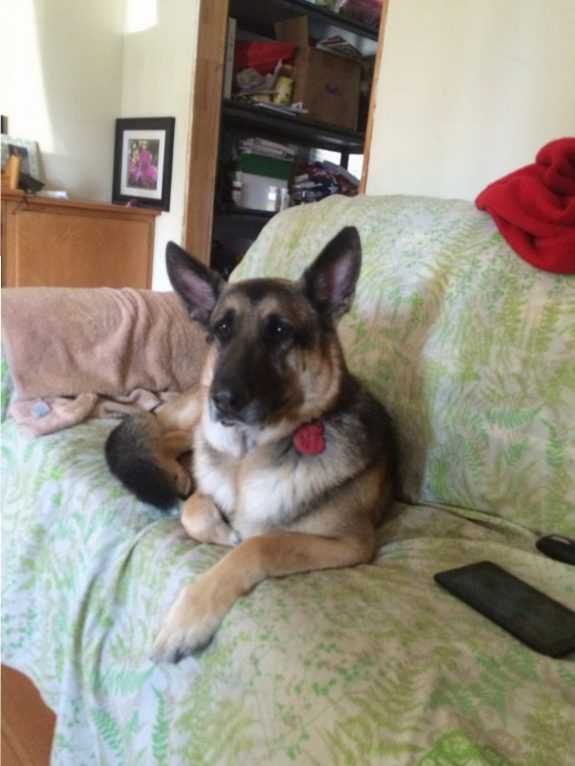 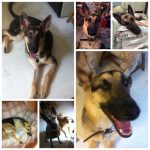 Sheba a crossed to the other side today.  She had been doing ok, starting to eat again (mostly baby food and deli meat), but something just wasn’t right.  She had bee having increasing difficulty getting around the house and outside to potty.  Last night she needed help every time she wanted to get adjusted in bed.  We didn’t sleep much and she was constantly panting.  This morning she got up OK for her car ride (highlight of the day), but by the time I got home around 3 and went to take her out to potty she was knuckling on the remaining rear leg and was unable to bear any weight on it at all.  I called the vet’s office to let the neurologist know we had symptoms.  He said we could bring her in or wait til the morning.  Sheba was adamant about getting into the car so we took her over to the vet’s office.  On exam Sheba had very little reflex in the remaining rear leg and cried out when he barely tapped her with the mallet.  Neuro said her symptoms were consistent with spinal cord infiltration.  Just yesterday we learned UofTexas identified the fungus as Rasamsonia spp. which looks and acts like Aspergillus and Penicillium but grows a lot faster.  With all this overwhelming information, we made the decision to end her suffering.  She fell asleep peacefully in our arms around 5pm.  A big thank you to everyone who has offered support and encouragement for the last few months, we really appreciate it! 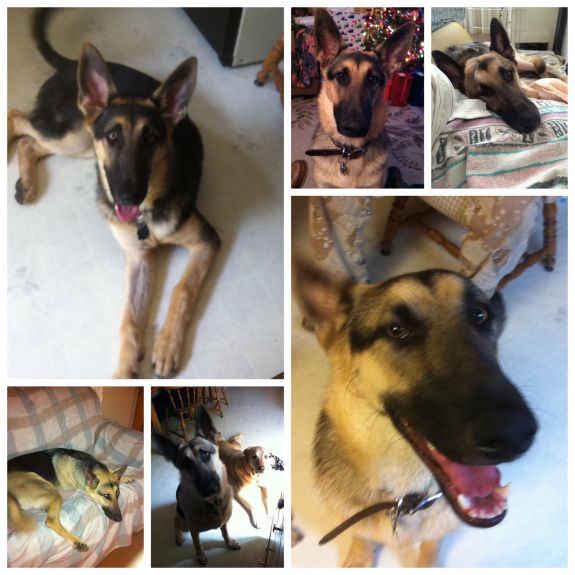 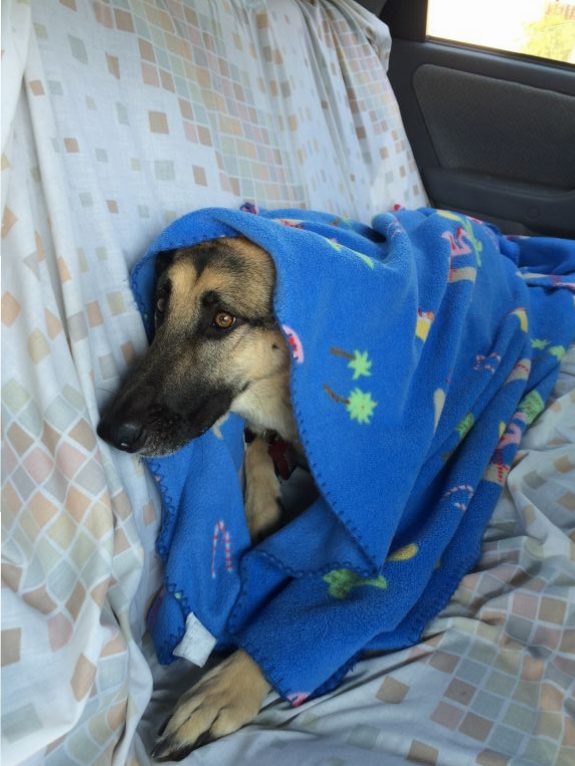 I think we’ve unlocked the key to Sheba eating: BABY FOOD!  She love the turkey with gravy and beef with gravy, haven’t tried the chicken yet though.  She also seems to like freeze dried liver treats, ostrich hearts, cheese, and goats milk.  We’re going to have a TON of baby food jars!

Since she stated coming up lame in February, Sheba has been getting car rides instead of walks.  Recently, we’ve had difficulties convincing her to get out of the car.

Finally got her out after an hour.

And half a bag of liver treats!

Obviously another moment of teenage rebellion

About Your Tripawds Blog:

New Tripawds Bloggers: Please review your default first blog post at left for lots of helpful links for getting started with your blog or review the Help Videos in your dashboard. Edit these widgets from your Appearance settings to remove this notice, upload a custom header photo, or choose from 130+ themes, and much more!

The Ongoing Adventures of Sheba is brought to you by Tripawds.
HOME » NEWS » BLOGS » FORUMS » CHAT » YOUR PRIVACY » RANDOM BLOG